5 Things I discovered about IoT at Javaland 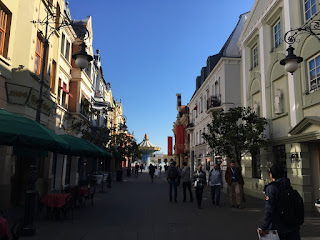 Last month I presented the Robo4J framework at InnovationLab, during the Javaland conference (28-30.03.2017). It was really an amazing experience, not only because of the nice conference venue but also because of all the things I’ve noticed during hours of talks. Robo4J had a small stand there and it was possible to show a couple of examples live. 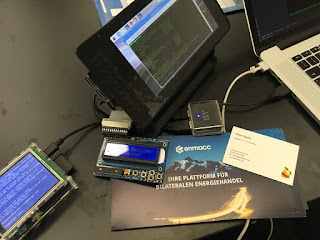 The first thing I realised pretty quickly, and appreciated, was the selection of the examples I had taken with me. I packed a Lego Mindstorm Education set with Lego Sensors, Motors, RaspberryPIs with external batteries and some LCDs and sensors (all from the Adafruid company). The Lego is for kids and pretty sturdy. Adafruid provides really good quality, and is robust enough too. All has been working perfectly over the whole conference without any problems.
The second important thing was my DNS/DHCP server configured on one of my RaspberryPis, providing a stable WiFi network. It was crucial because without it none of the examples would fully work. 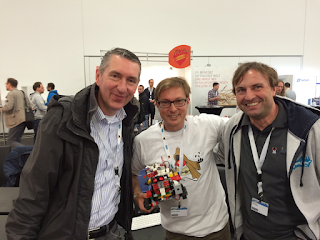 The third thing I appreciated is about the interest of the people attending. Most of the people seeing all the unconnected hardware elements, laying on the table, asked about it. Maybe they didn’t believe it could work. Sure, Java and Hardware is not an easy thing; it takes some effort to make it work. I disconnected all components because I wanted to show how easy it is to build a working system by using the Robo4J framework. We then spent some time connecting all pieces together and writing some simple Robo4J applications. In the end we ran the application and it was working. My impression was that they were surprised based on the feedback I’ve received. They were impressed how easy it can be to use Java and Hardware together.

When the people saw what Robo4J can do for IoT development it turned into a discussion about its usage. I warned everyone that Robo4J is still currently in an alpha version. Even so there are already a lot of usages where people may use Robo4J. A lot of attendees asked about how to setup the Lego Mindstorm they've bought for their kids. They never used Java there because it was not so easy to setup all together. As a consequence of those discussions we have prepared two helpful blog posts.

The fifth discovery I did is that people try hard to use RaspberryPi together with Python. All pre-prepared examples are very easy to run for the users, but than sooner or later they are struggling about how to continue with the development. I met a couple of people from Robotics startups, and they told me that they would highly appreciate to have the possibility employ Java. Aside from static typing, Java has a bigger and more active community. On the internet there are, in my opinion, much more useful libraries. Java also provides you better control over your application runtime and much more. 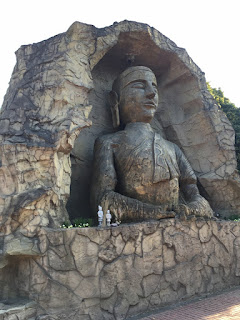 Summary
Javaland was extremely helpful for Robo4J. We got really nice feedback on the framework itself. There is still much work to be done before we release the first version. We are looking forward to implementing your feedback in Robo4J.

Miro, for the Robo4J Team
Posted by wengner miro at 12:03 PM