Robo4j.io framework has been selected for JavaOne4Kids part. Robo4j.io autor (@miragemiko) and the main commiter to the project has also attended many talks about robotics, Internet of Things and future inotvations, similar to the different discussion about Java 9 fugure. He also participated at Java Community Process and Java Hub at JavaOne 2016. 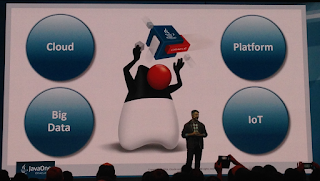 Out of all JavaOne 2016 experiences have crystallised and confirmed the future directions of Robo4j.io framework development. Although this post is not fully focused on the details we can separate those direction in following groups:
1. Reactive framework (platform)
robo4j has been since the beginning designed a the non-blocking platform for highly concurrent tasks/events that needs to under the certain conditions synchronised and processed.
2. Microservices design
robo4j has been divided into the fully independent units. Those units are accepting/providing connection with the rest of the world using specific protocols. Units are distributed over the ecosystem and they are fully independent.
3. Machine-learning and big data
robo4j provides sockets to plug different types of data storages and algorithms that are later used as the inputs/outputs for internal or external actions.

We do pay special attention on those three mentioned points. Why ? Robo4j.io framwork intents to be the framework that fully hightly supports distributed systems. Such point is becoming to be crucial in the upcoming age of Internet Of Things, Clouds etc.

All of three mentioned points are representing a lot of work and touched framework continual evolution that need to be done to achieve the expecting goal.

...And as the CERN is taking a care about small things, Let's move the robo4j forward

to the next milestone!!